The streets and alleyways in Venice have different names than in most of the rest of Italy.

In Italy almost everything is a via or a strada, but in Venice they have names like calle, salizada and fondamenta.

That is because Venice wasn’t a part of Italy for most of its history. In fact, before 1860 there was no Italy, except as a geographical expression, as Count Metternich famously said at the Congress of ViennaCongress of Vienna 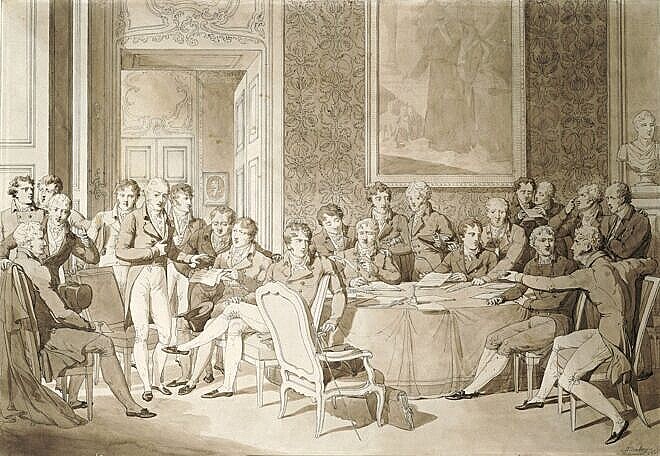 The Congress of Vienna (1814-15) was a series of diplomatic meetings held in Vienna. Here the major European powers restored the map of Europe to how it had been before the French Revolution and the following wars.

However, they did not restore the Venetian Republic. Instead Venice fell under Austrian-Hungarian rule as part of the Kingdom of Lombardy-Veneto. in 1815.

The Venetian Republic, and the Venetian people, had their own language, and the topography of Venice is mostly in Venetian, not in Italian. Therefore many of the streets have apparently unusual names.

Calle means an alleyway between houses. They are normally rather narrow. The Latin origin is “callis” which also exists in Spanish and Catalan.

Campo normally means a field, but in Venice it is a square. Originally the campi weren’t paved but covered in grass. The Campo di San Trovaso in Dorsoduro, and the Campo di San Piero in Castello are still partly unpaved.

Campiello is a small or secondary square. It is a Venetian diminutive of campo.

Corte is a courtyard. Due to changes some courtyards are now roads, like the Corte Novo in Castello.

Fondamenta is a sidewalk on a canal. Often the fondamenta and the rio (the canal) have the same name. In Castello che Fondamenta de la Tana and the Rio de la Tana are such a pair.

Piazza means a square, both in Italian and Venetian. In Venice there is, and was, only one: Piazza San Marco.

Rio terà literally means an interred canal in Venetian. Canals have been interred since the earliest times, and the new roads retained the name with the addition of terà. Hence, Rio Terà dei Pensieri was originally Rio dei Pensieri.

Riva normally means the side of a canal where boats can moor, where the fondamenta and the rio meets. However, in a few places, especially on the harbour front, it now means a very wide roads along the shore. Examples are Riva degli Schiavoni and Riva dei Sette Martiri.

Salizada are often slightly larger alleyways, sometimes referred to as the earliest paved roads in Venice. They often curve, just like most canals, so most likely they were canals or ditches, filled in to create a road.

The minor or less common names

Some Venetian streets have odd or less used types of names.

Paludo means a swamp or a marsh. Such roads were once ditches, minor waterways, or just muddy areas, only becoming roads later.

Borgoloco has an uncertain origin, but most likely it refers to the old Venetian expression tegner a loco e foco, which means to host somebody (a place and a fire). They are places with inns where travellers could stay for the night.

Piscina means a swimming pool in Italian, but in Venetian it means a basin. There were often dead-end canals which served as mooring space for boats at night.

Ramo means a branch, and that is what they are. They are secondary side branches to another larger road. For example, in Castello Paludo Sant’Antonio has numbered side passages as in Ramo Secondo Sant’Antonio.

Ruga are also minor alleyways. The word means “wrinkle” in Latin and Italian, so they might have been alleyways with an uneven surface.

Sottoportego is a passage under a building, at times along a canal or on the side of a square with columns on one side.

After the fall of the Venetian Republic Venice has changes under the influence of the new foreign rulers, who didn’t always use Venetian names for new streets.

Piazzale is a large open square. The fascist regime demolished an entire corner of the city and made a bus terminal and parking houses, because in their view Venice should modernise. That area is the Piazzale Roma.

Strada in Italian is a major road. With the arrival of railroads to Venice in the 1830s came a need for a pedestrian passage from the new station to the Rialto area. The Austrians interred several canals and demolished numerous houses to widen alleyways, and the result was the Strada Nuova, the new street.

Via is the normal word for a minor or secondary roads in Italian, and there is only one in Venice. The Via Garibaldi was once a major canal, the Rio di Castello. The Austrian rulers of Venice decide to cover it up and create a wide road with outdoor cafés like in Vienna. Until 1866 it was called Via Eugenia after an Austrian prince.

One reply on “Streets in Venice”

Feel free to write or call for questions and further information.

This website uses cookies to improve your experience while you navigate through the website. Out of these, the cookies that are categorized as necessary are stored on your browser as they are essential for the working of basic functionalities of the website. We also use third-party cookies that help us analyze and understand how you use this website. These cookies will be stored in your browser only with your consent. You also have the option to opt-out of these cookies. But opting out of some of these cookies may affect your browsing experience.
Necessary Always Enabled
Necessary cookies are absolutely essential for the website to function properly. This category only includes cookies that ensures basic functionalities and security features of the website. These cookies do not store any personal information.
Non-necessary
Any cookies that may not be particularly necessary for the website to function and is used specifically to collect user personal data via analytics, ads, other embedded contents are termed as non-necessary cookies. It is mandatory to procure user consent prior to running these cookies on your website.
SAVE & ACCEPT